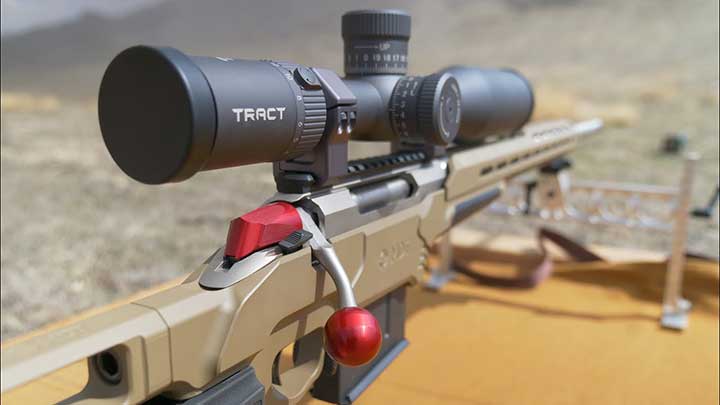 All you need in this article, i will cover these steps and the process that I go through to mount a scope on the rifle, get it leveled and also get a zeroed and on paper.

To start off, I have a tracked toric ultra HD, this one is the MOA version. It is a first focal plane scope, it is a 4-20 power and it has a great MOA reticle in there. It has a zero stop, the turrets are some of the best that I’ve ever felt.

It parallax’s down to 25 yards, it’s illuminated and it has locking turrets as well. It’s a really awesome scope, it has shot HD German glass and the finish on this scope is beautiful to go along. With that scope, I also have a bubble level which I got from tracked, it’s available on their site. If you want to take a look and I also got iota triad rings. These rings are special, they’re pretty cool. The key way that fits into the Picatinny rail of the rifle is modular, what I mean by that is the bar that goes left to right across the gun has different thicknesses to make it fit perfectly in your Picatinny rail. That way under recoil, your scope rings will not shift front to back on your rifle even under the most extreme circumstances.

I’ve had other scope rings where this happens and if yours don’t fit perfectly, before you tighten them onto the rifle, place them on your Picatinny rail and push them towards the muzzle of the gun. That way under recoil, the metal surfaces are already touching and it will not get pulled off in the wrong direction.

On my rifle, I have a 30 MOA scope base which is a little bit more than most people run, traditionally it’s 20 but mine is 4 and our key outdoors I went with 30 I considered going with our 40 as well. So if that’s something you’re interested, it’s a full Picatinny rail for the tikka and this one also has a recoil lug. That way with under recoil, it’s not trying to shear off the hardware, that’s holding the scope on top of the base. So when installing your rings, be sure to check your user guide, the iota triad rings did come with instructions and it did supply a torque spec for them. So I used a torque wrench and put them down to the torque spec which they suggested 25 inch pounds. Once you have the front and rear on the scope base, I mount those on the scope base first and then I will place the scope onto the rifle. Make sure and place your scope into the Rings before tightening them down.

Making sure that the Rings do not go too far to where they’re riding on the Bell of the scope where they would cause your scope damage. I try and get them as far apart as possible and on top of this base on my rifle. I’m able to get to the very edge of both sides which I prefer another great feature of these iota of triad rings is that the hardware mounts from the bottom side up providing a clean look which I really like. The hardware will not collect water and rust out over time everything should fall out of it and the top of it just looks better.

They are pretty close to the same finish, they’re a dark matte graphite gray. It’s a really cool color I really dig it. So at this point, you’ve got your scope rings on the rifle, go ahead and get them torque to spec to your base. Once you find out which length and which setting you want so that you can get your scope on there safely without clamping onto the bail of the scope. The iota triad rings that clamp on to the base you they supply a torque spec of 25 inch pounds which I went ahead and used my torque wrench for. At this point, take your caps for your rings, drop those on top, put in the hardware on both sides. All four but don’t tighten it up yet, make it to where the sky is still able to shift left and right, that way we can go out and get the scope leveled with the rifle and then also get the bubble level attached to the scope and get that leveled to both of those. Definitely check and see.

Now it’s time to get the scope, the bubble level and the rifle all leveled together.

So the first step I did when I took it out to the garage in front of my plumb bob, I set the rifle mine has a locking bipod for Kant, so I’m able to lock it left and right wherever I want.

If you’re unable to do this, shim your bipod with maybe some books or maybe a beanbag or whatever you can do set your rifle on a backpack, whatever you need to do to get it leveled. I put a bubble level on my Picatinny scope base for the rifle level that’s where I decided,that’s where my rifle will be leveled off . Once I’ve found the center of that bubble level off the Picatinny base, I will lock my bipod in at which point, I will then look through the scope at the plumb bob and i will get that scope dead-on level with that plumb bob in accordance with the rifle being level as well at that point, i will torque down the scope cap rings, not to spec, just to snug them up and then I will start working on getting my bubble level to represent where the rifle scope is level as well.

The reason to do a scope bubble level and not just a level that’s in a chassis is the second that you take your scope out of the Rings. If you don’t have a bub attached to it, your scope is no longer level and you have to repeat this process. If you put a bubble level on the scope even if I take it out of these rings and drop it into a completely different system, I know that that level represents when the reticle and the tracking of this scope is dead-on with gravity. The reason that we go off a plumb bob is gravity is pulling that plumb bob straight down in line with gravity you want your reticle set up in that exact same line, because when you fire, your bullet is going to be pulled down straight in line with gravity, so what I do to do a bore sight is I leave my phone set up in this. Now looking through the scope, I will actually record a video and speak out loud as I look through the bore whether its Center maybe left, right, top, bottom of the circle of the barrel. I have a roof vent exactly at a hundred yards up here in a neighbor’s house. So I’ve set up in the kitchen which my life with my wife loves and I look over at the roof vent on a neighbor’s house, I drop the cheek piece, I’ve taken the recoil pad off just because it would block my view through the bore.

Now I can understand that most people will not have this setup so all you have to do is get your rifle set up with traditional bipod whatever you got. You can use like books individual sheets of paper if you want to get that crazy with it notepads, shooters medics work great like little beanbags and just settle in exactly where you want. If you’re doing that then you want to get your boar perfectly centered on an object. Hopefully they do a hundred yards, something that mostly fills the bore you kind of want an outside edge to see where you’re looking at and then you look through your optic without moving the rifle and adjust it around, so you just have left-right up-down whatever you need to do compared to where your rifle sitting definitely continuously switch back and forth. Looking through your board, looking through your scope, making sure your board still looking in the same spot, get your stove zeroed on to what you’re looking for and I should get you on paper.

I often start at 50 yards, sometimes I go out to a hundred yards but I’ll give you an example of looking for the scopes. I’m just moving the butt of this of the rifle around left and right and then I will just say Center when the rifle is centered and what I’m looking at is in the middle of the bore super simple. Sometimes your eyes get a little bit drained out so just kind of blink look away for a little bit and then get back to it get your scope for sighted.

We’ve got our rifle bore sighted now to the best of my abilities, we’re gonna take it out, we’re gonna go out to 100 yards then we’re going to get it on paper zero it and we should be ready to rock and roll. This thing will be you’re ready to shoot and level mounted and zeroed let’s get to it

We just fired our first group our first round landed five right and three high so I adjusted five left and three down and it put us within an inch of that crosshair and then I fired a group there to see.

If it was going to consistently hit near the center, let’s go take a look at this target and we’ll see how we did.

The great thing about this tract optic you’re able to measure and make corrections just within the reticle at any range what it tells you there because its first focal plane, it doesn’t matter if you’re at 50 yards or a hundred yards, 5m away equals, 5m away on the turrets, you don’t have to do any math like on a second focal plane, you have to double the amount of clicks you do at 50 yards versus a 100 yards, this makes it so easy and simple. The reticle is designed really great and easy to make adjustments so let’s go take a look at this target, our first shot like I say landed high and right which is up here and then our follow-up shots are just about a half inch left of dead center and it’s exactly 1 MOA high. So I’m gonna bring that down one more MOA and I’m going to bring it right to half and that’s probably just bad measurement on my account through the reticle, so really exciting got my scope zeroed. It’s track made it super easy.